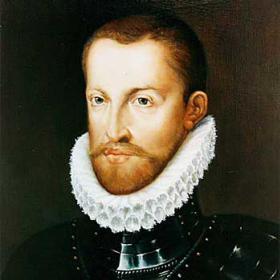 Rudolf II. Habbsburg - Roman emperor and Czech King was born in 1552 in Vienna to the family of Emperor Maximilian II. and his cousin Marie of Spain. Under the pressure of his mother, he and his brother Arnos were sent to Catholic upbringing to Spain to the court of Prince Philip II in 1563. Here they received a high-quality, but fundamentally catholic focused education to Maximilian's displeasure who managed to bring the boys back after eight years, when in exchange sent his youngest sons to the court together with his daughter Anna, who later became Prince Philip's wife.

At the age of 20 in 1572 Ruolf becomes the Hungarian and later also the Czech and Roman king. In 1576 Maxmilian dies and Rudolf takes over the government as a Roman Emperor. Initially, he reigned from Vienna, but moved to Prague in 1583 because of the fear of the expanding Ottoman Empire. Prague becomes the political and cultural center of Europe. Many scholars and artists were aiming their journeys to Prague, since Rudolf was known as a generous supporter and collector of arts and science.

Since the beginning of the 80s of the 16th century, sympomts of mental illness - seizures and mood explosions gradually begin to manifest ,he avoids contact with people, stops receiving audiences, distrusts his counselors, and neglects the execution of the royal duties. He begins to lose influence in individual countries which turn to the side of his brother Matthias who gatheres an army and marches to Prague in 1608. The campaign ends with the singing of the so-called Libeň Peace agreement, by which is the monarchy divided into an area under the administration of Matyas (Moravia, Austria, Hungary) while Bohemia, Silesia, Luzice remains under Rudolf rule. Czech Estates exploited the situation of the weakened monarchy to pressure Rudolph to abolish the Svatojakubský mandate (proclaimed in 1508, ordered the closure of the Czech brothers' churches and their transfer to the Catholics) and even to pressure Rudolf II. to declare the freedom of religion in the Czech Kingdom in 1609.

Rudolf II. once again tried to reverse the situation with a strong support of the Bishop of Passau, Leopold V. Habsburg, who invades Bohemia and starts looting in 1611. However, he does not succeed in achieving much success here so Rudolf is withdrawing from here and soon is forced to abdicate too. He died on 20 January 1612.

Dear Visitors, we do suppose that you would like to see the pictures that we have exhibited here. Therefore, we offer you to arrange a visit to painter Mr Vašák in Rychnov nad Kněžnou, Eastern Bohemia, The Czech Republic. You can arrange your visit via the e-mail or you can call Mr Vašák on his mobile number.

Back to the top